In March and April, Germany's commercial net exports amounted to 9,425 GWh, equivalent to 11% of the electricity generated in the country during that period and a year-on-year increase of 4%. The main customer for Germany's net exports (exports less imports) was Austria, which accounted for 3,358 GWh (down 38% compared to the previous year). The Netherlands followed in second place with 3,053 GWh (up 70%), ahead of France with 1,963 GWh (up 18%).

Germany was a net importer of electricity from Czechia and Sweden, with net imports of 1,244 GWh (down 3% year-on-year) and 8 GWh (down 97% year-on-year), respectively. The large decrease in electricity trading with Sweden is due to a long-running failure of the cable under the Baltic Sea. The process of looking for and resolving the problem has been taking up significant resources and is expected to continue until 27 May.

The wholesale price for electricity was somewhat higher compared to a year earlier. In March and April, the hourly products on the EPEX day-ahead market were traded at between 98.19 euros and minus 29.99 euros per megawatt hour (€/MWh), resulting in an average price of €34.75/MWh, corresponding to a year-on-year increase of €4.44/MWh.

On the day-ahead market exchange, the highest price of the past two months of €98.19/MWh was recorded on Monday, 19 March, between 7pm and 8pm. During this hour, consumption was high at 73 GWh and there was relatively little wind, so only 8.6 GWh of wind energy was generated. By contrast, when Storm Burglind hit Germany in early January, up to 42.6 GWh of wind energy was generated in a single hour. Although prices rose to nearly €100/MWh on 19 March, Germany continued to export electricity. In the hour with the highest price, it exported a total of 8.3 GWh to France, the Netherlands, Austria, Switzerland, Luxembourg and Poland, while it imported just 3.2 GWh from Denmark, Czechia and Sweden, resulting in a net export of 5.1 GWh.

During that hour, the price was the same across the common market area of Germany, Austria and Luxembourg as well as in France and the Netherlands. There is always just one day-ahead price in the common market area, since it has no trade restrictions. There were lower prices in that hour in Switzerland and Czechia, while SMARD has no data on the price in Poland for that time.

European market coupling can make prices the same across other borders as well, depending on the market situation, in this case in France and the Netherlands. The prices on the day-ahead market and the amount of electricity traded across borders are calculated by the electricity exchanges in a coordinated procedure, enabling the available electricity transmission capacity to the neighbouring countries to be utilised efficiently. This happens the day before the electricity is actually fed into the grid.

As well as the commercial cross-border trade that is calculated, there is also the subsequent trading on the intraday market, on which electricity can be bought and sold at short notice for the same day. This buying and selling means that total imports and exports at a border can be different to the result of the day-ahead market. The final results of these different trading periods of the commercial trade and the wholesale prices of the day-ahead market are shown on the SMARD website. Information on how the electricity market works and on the commercial electricity trade can be found on the SMARD website in the section "Electricity market explained".

The lowest electricity price on the day-ahead market was minus €29.99/MWh between 10am and 11am on Sunday, 18 March, when it was very windy, leading to high wind output. The wintry weather in the middle of March led to temperatures falling below freezing in some parts of Germany, but because the sun is already far higher at that time of year than in winter, there was a lot of electricity fed into the grid from solar plants on 18 March. The wind was also strong, leading to a high level of production from renewable sources overall, which made a large amount of electricity available on the day-ahead market. As consumption is generally lower at weekends anyway, the result was negative prices. When there is low consumption and high generation, Germany also experiences higher exports as well as low prices. Net exports were 13.3 GWh between 10am and 11am on that Sunday, about 2.6 times as much as when the price was highest. 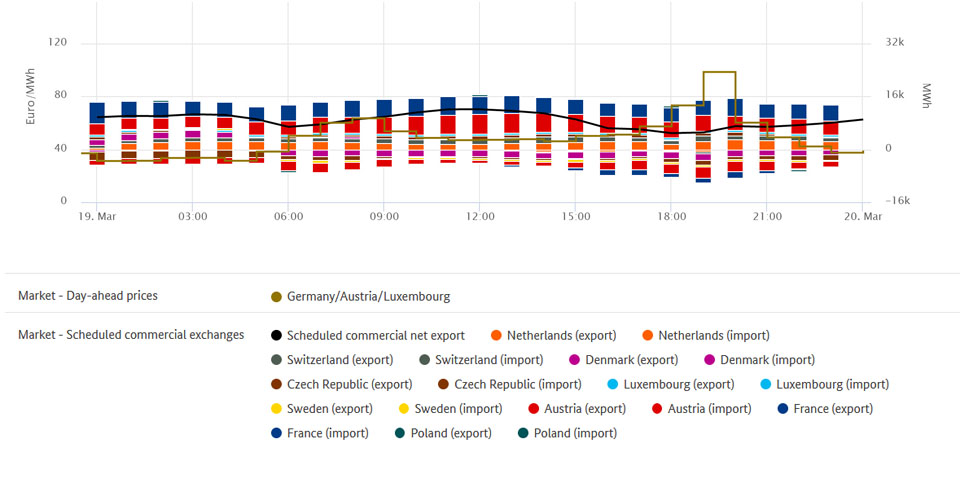 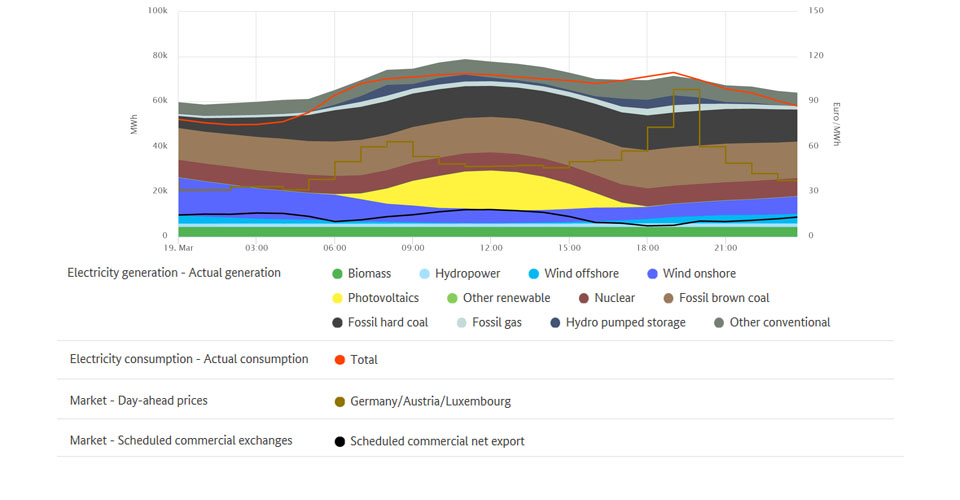 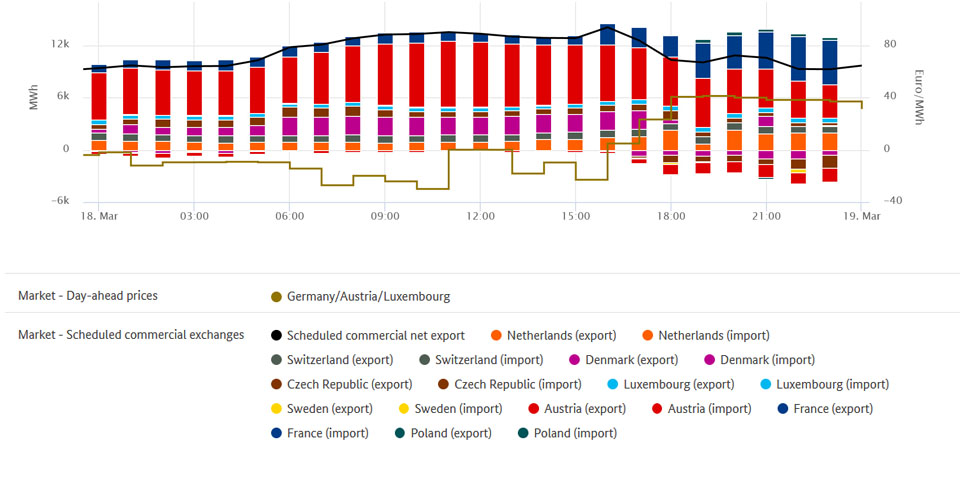 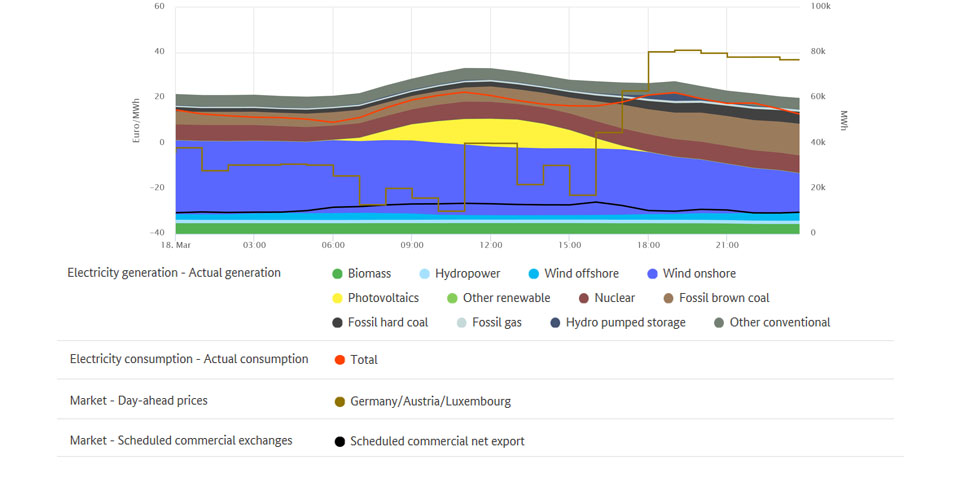 We could not process your registration.