High-voltage lines on a sunny day in spring.

Germany imported more electricity from France, Switzerland, Denmark and Sweden in May and June than it exported to them, making it a net importer. The net amount of electricity imported from those countries was 4,106 GWh, a 53.4% year-on-year increase. The changes in imports and exports cannot always be traced back to individual events. Rather they are the result of recurring short-term price fluctuations, which reflect the interaction of supply and demand in the respective countries.

The marked rise in imports from France (97.4%) is due to the change in price differences. While in the previous year, electricity prices had been higher in France than in Germany, this year German prices were higher, making it more profitable for electricity traders to import electricity from France in May and June than to buy it at higher prices in Germany. Wholesale prices in France were on average lower partly because of the high availability of nuclear energy. It caused French wholesale prices to fall about €5/MWh year-on-year. In Denmark and Sweden, too, wholesale prices were lower in May and June than in the same months last year, making importing from those two countries financially worthwhile.

Another reason for the rise in German electricity imports in May and June 2019 is that the country produced less electricity (down 5,419 GWh) than in the same two months of last year. Consumption was lower as well (down 4,998 GWh) but not as much as generation, so some electricity was imported.

The main customer for Germany's exports was Austria, which accounted for net exports of 1,628 GWh in the period (down 18.8% compared with the previous year). Luxembourg followed in second place with 690 GWh (up 1.6%), ahead of the Netherlands with 659 GWh net (down 78.6%). The decline in net exports to Austria was partly due to the split of the German-Austrian bidding zone, which limits trade between the two countries.

Compared with the previous year, wholesale prices for electricity fell slightly. In May and June, the hourly products on the EPEX Spot day-ahead market were traded at between 76.50 and minus 90.01 euros per megawatt hour (€/MWh), resulting in an average of €35.22/MWh. That was €2.60/MWh less than in the same period of last year.

On the day-ahead market exchange, the highest price of the past two months of €76.50/MWh was recorded on Thursday, 13 June, between 8pm and 9pm. At that time, consumption was high and there was a low level of generation from renewables. The electricity market reacts to this kind of situation by taking power from storage facilities (eg pumped storage stations), reducing the consumption of flexible loads and increasing use of conventional power stations with higher marginal costs, in particular gas-fired power plants. Thanks to the coupling of the electricity markets in Europe, Germany was also able to import cheaper electricity from Denmark, France, Sweden, Czech Republic, the Netherlands and Switzerland during the period (approx 5.3 GWh).

The auction prices for electricity on the EPEX Spot day-ahead market were negative for 19 consecutive hours on Saturday, 8 June 2019, from midnight until 7pm (average price minus 59.02 euros per megawatt hour). Negative prices mean that generators have to pay for the uptake of the electricity they make during that period. They create a powerful incentive for generators and consumers to react flexibly to electricity production from renewable sources.

The lowest electricity price was minus 90.01 euros/MWh between 2pm and 3pm. This price was so low because weak consumption over a bank holiday weekend coincided with high levels of generation from renewables. In addition, the electricity exchange was hit by IT problems causing several server failures. This slowed down the bidding process and led to an unprecedented partial decoupling of borders (inc Germany-France, Germany-Austria, Germany-Netherlands, Germany-Sweden). Local auctions therefore had to be carried out on each national market. The price in Germany was thus rather lower than it would have been if the market coupling had been working properly. With market coupling, electricity exchanges calculate how transmission capacity can be used optimally in a coordinated process. The result is an increasing alignment of prices across Europe. On 8 June 2019, prices in all the countries bordering Germany were higher than in Germany, and they were positive, with the exception of four hours in France and 15 hours in the Czech Republic.

The graphic shows wholesale prices from the single bidding zone of Germany and Luxembourg and neighbouring countries on 8 June 2019.

Exports occurred between midnight and 7pm since prices were higher than in Germany in all neighbouring countries. However, because the markets had been decoupled, transmission capacity for this exchange was allocated in explicit auctions. Net exports during the period amounted to about 151 GWh.

This unusual event had a major effect on the average exchange price for electricity in the months of May and June. If the 19 hours of negative prices on 8 June 2019 are not included, the average price is €36.46/MWh, only €1.30/MWh less than in the previous year (based on a comparable number of hours in 2018). 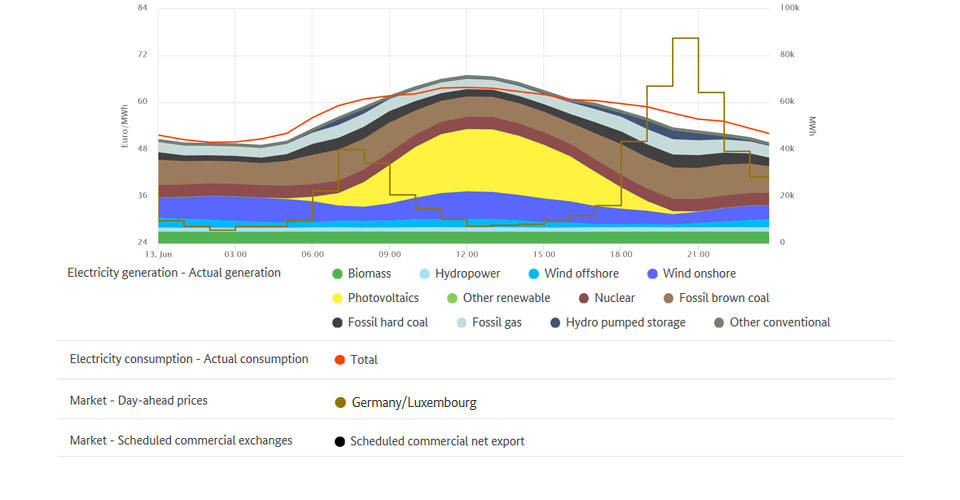 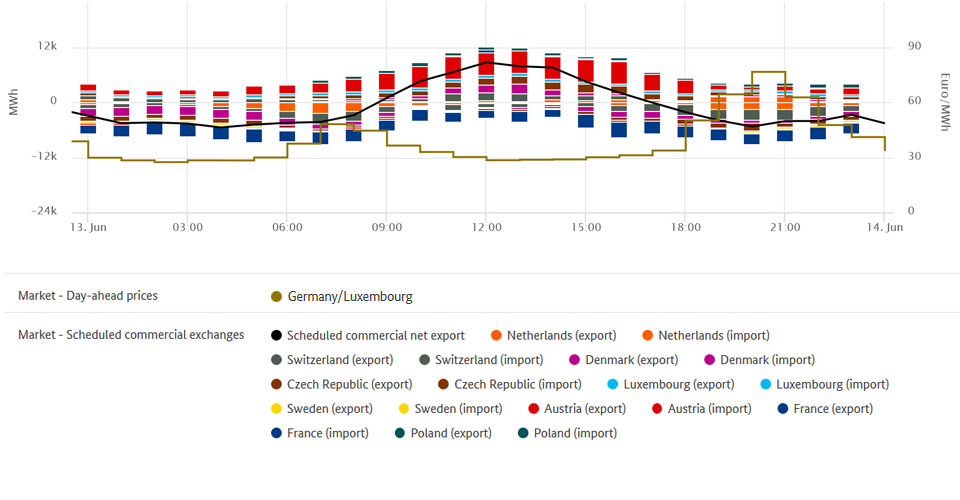 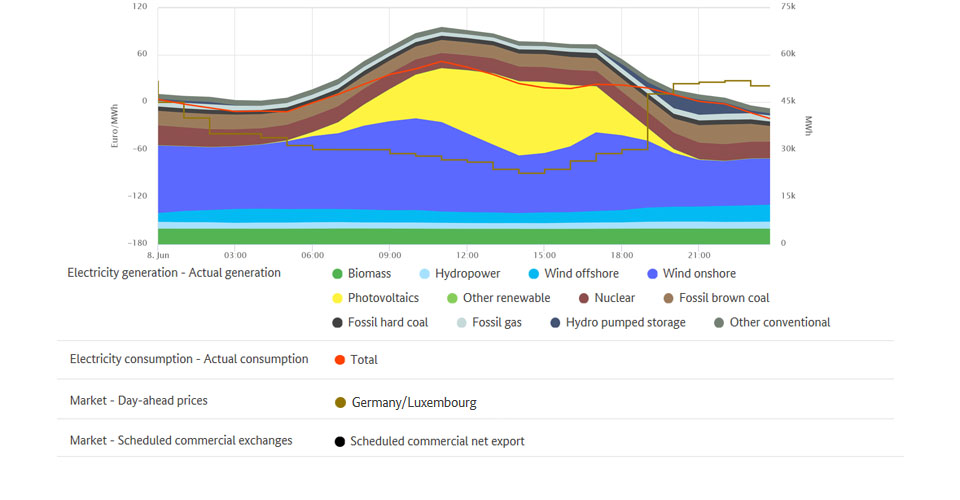 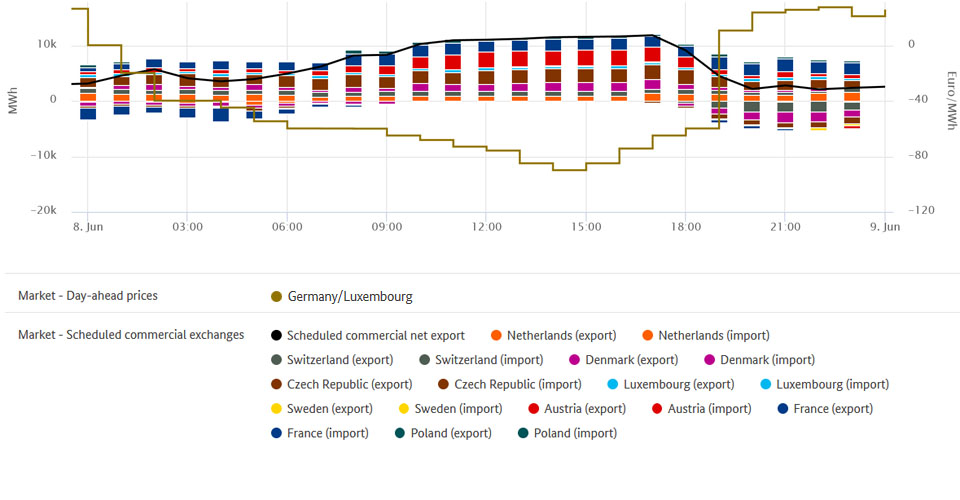 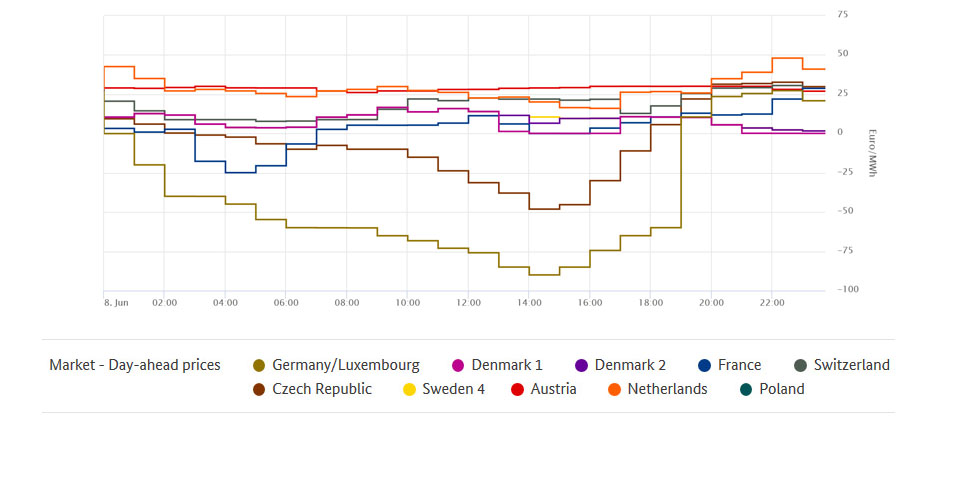