1 July 2021 – Electricity consumption in the first half of 2021 was up 4.7 percent (%) on the same period last year. Renewable generation was 12.1% lower and covered 44.4% of the grid load. Germany was a net exporter in commercial foreign trade.

Two particular factors should be kept in mind when reading the figures below for electricity consumption, generation, wholesale prices and trading. Firstly, last year, in particular, the electricity market – like nearly all areas of public life and the economy – was affected by the restrictions imposed to contain the Covid-19 pandemic. Secondly, the first half of last year had one calendar day more than the first half of this year because 2020 was a leap year.

Last year, the measures taken from mid-March onwards to contain the Covid-19 pandemic had led to a significant decrease in consumption. Consumption in the first six months of 2020 amounted to 240.8 terawatt hours (TWh). In the first half of this year, consumption was less affected by the measures to contain the Covid-19 pandemic and at 252.2 TWh was higher than in 2019 (248.5 TWh).

There was a high level of generation from wind in January and February 2020. In February alone, storms led to a wind generation of around 16 TWh. Total renewable generation was 26.7 TWh and the highest in a single month since at least 2015. There was also an above-average output from renewables on the extra leap day. By contrast, renewable generation this February totalled 17.4 TWh and was therefore 34.7% lower. In March 2020, many hours of sunshine had then led to a high level of solar PV generation at 4.1 TWh. Generation from wind was also about 2.7 TWh higher.

The chart shows the actual electricity consumption and the residual load in the first half of the year, with figures for each week in the period.

This is reflected accordingly in the residual load. Another factor was the high demand from neighbouring countries, which led to an even higher demand for electricity. 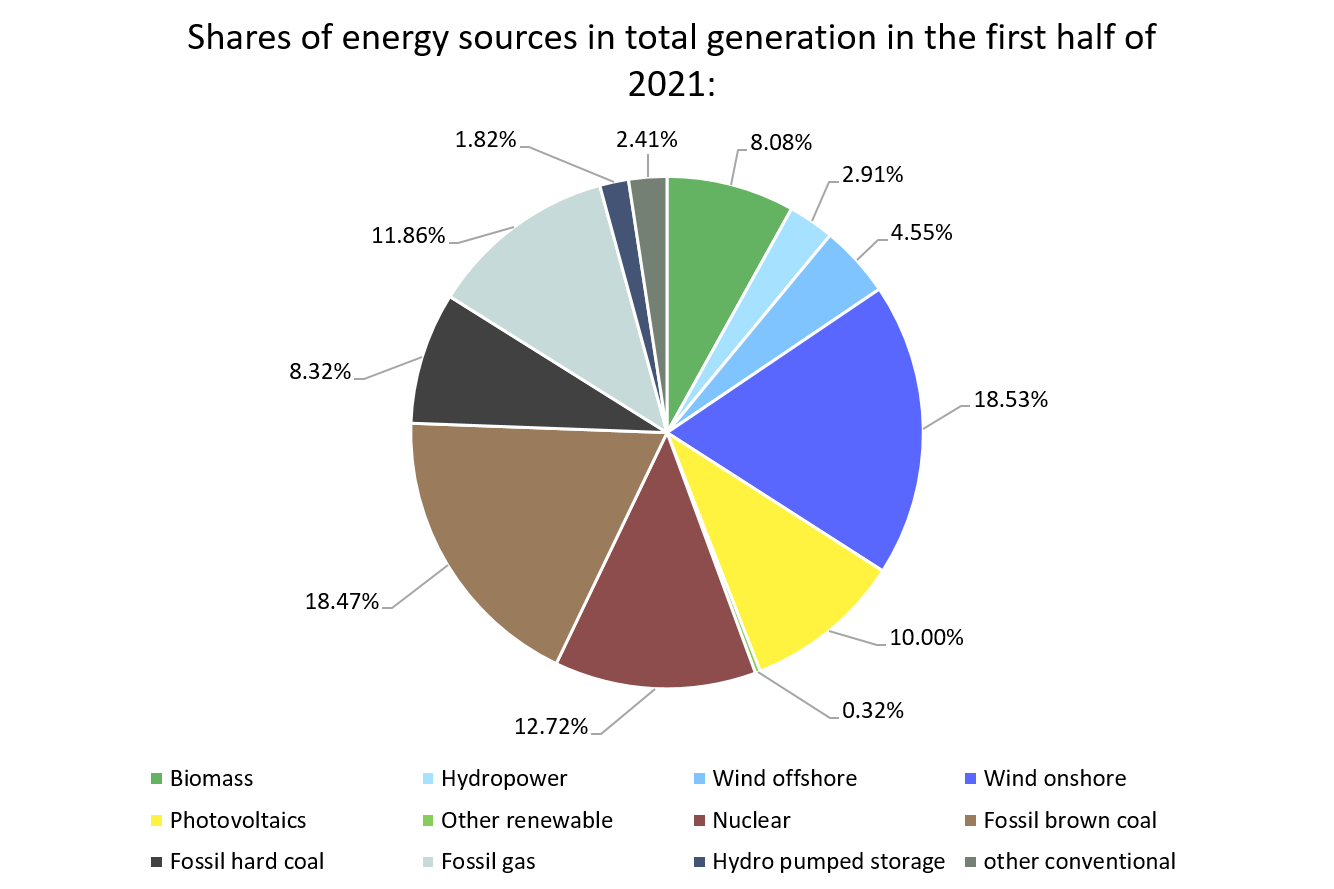 In the first half of 2020, the "6-hour rule" took effect on 14 occasions, with the result that payments for renewable installations selling electricity directly were suspended for a total of 150 hours. Under the 6-hour rule, if the day-ahead price on the electricity exchange is negative for a period of at least 6 consecutive hours, the installation operators do not receive the market premium as from the first hour in the period with negative prices. In the first half of this year, the rule only took effect on 5 occasions, with payments being suspended for a total of 56 hours.

The revised Renewable Energy Sources Act (EEG) 2021 has shortened the period from 6 to 4 hours for new installations, with the 6-hour rule still applying to old installations. Negative prices were recorded in a period of at least 4 hours on 13 occasions, with payments being suspended for a total of 93 hours.

The main reason for the increase in wholesale prices compared with the first half of last year is the higher electricity consumption. Another reason is the significant increase in the price of EU carbon emission allowances since the beginning of the year, as well as in the spot prices for crude oil and natural gas. Higher prices for carbon allowances and fuel lead to higher marginal costs for electricity from fossil fuels. This is reflected in higher wholesale prices, in particular at times when renewable generation is low.

The lowest wholesale price was negative €69.00/MWh and was recorded on 22 May between 2pm and 3pm. During this hour, renewable generation was 54.1 GWh and higher than the electricity consumption of 52.3 GWh.

The highest wholesale price was €139.72/MWh and was recorded on 23 June between 7pm and 8pm. During this hour, the electricity consumption of 59.7 GWh coincided with a low level of renewable generation of 13.6 GWh.

A comparison between the average prices in Germany and in neighbouring countries shows a similar trend in prices. The highest average price in the first half of the year was €62.41/MWh and was recorded in Poland.

In the first half of this year, as last year, Germany was a net exporter of electricity. Net exports were up by 13.9% at 8.2 TWh (2020: 7.2 TWh). At what point in time electricity is imported or exported does not depend solely on supply and demand in the country in question, but also on the electricity prices in the other countries. The above comparison of wholesale prices shows that in the first half of this year it was worthwhile for some countries to buy electricity from Germany. Wholesale prices determined as a part of market coupling result from what are known as the relative generation costs, which vary over time. Wholesale prices are influenced by various factors, including the fluctuating wind and sun conditions, the cost of fuels and the cost of carbon emission allowances. Available transmission capacity at the national borders also plays a role.

Germany was a net importer of electricity from:

The figures presented in the chart and in the text may be updated at a later date. Further information about possible updates and data definitions is available (in German) in the user guide.