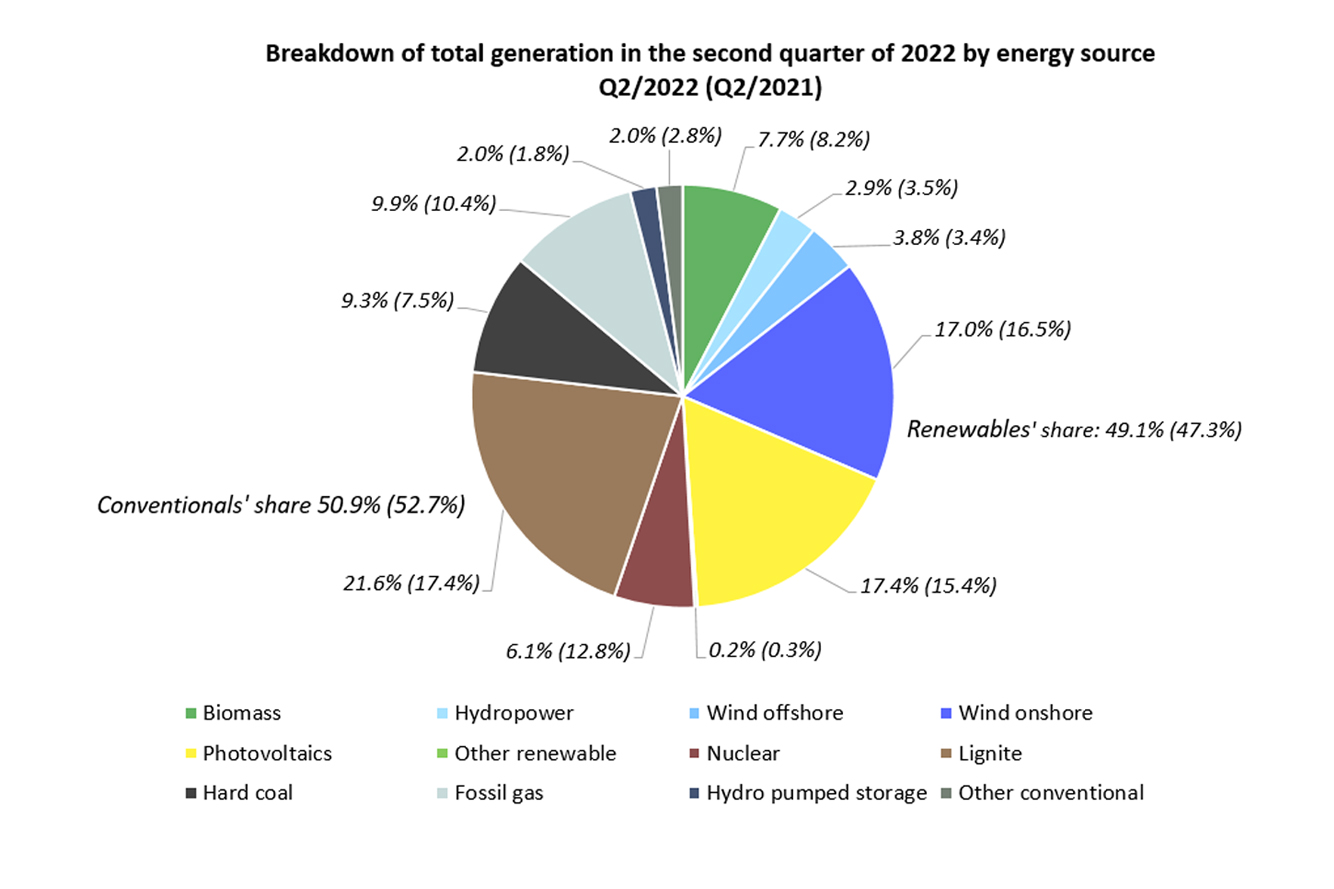 Among renewables, onshore wind was the second largest source of overall generation (17.0%) this quarter, followed by biomass (7.7%), offshore wind (3.8%), hydropower (2.9%) and other renewables (0.2%). These ratios have hardly changed compared with the second quarter of 2021.

Weather conditions were favourable for wind power plants, especially at the beginning of April. The electricity generation timeline shows that feed-in from photovoltaic installations increased following the stormy weather at the beginning of the quarter. The sunny weather in May and particularly in June played a key role in this and resulted in the record levels mentioned above.

A look at the share of renewable energies in electricity consumption within a day shows that renewables had their highest share of consumption (87.5%) on Saturday 28 May. Electricity generation of 970.6 GWh coincided on that day with an electricity consumption (grid load) of 1,109.5 GWh. From 9.45am until 5pm the grid load was continuously covered by feed-in from renewables. There were similarly long periods of grid load coverage by renewables on 21 May and 6 June. Energy that was not needed during these periods was used, among other things, to fill pumped storage reservoirs. This can be seen in the second chart below.

Wholesale electricity prices higher than in second quarter of 2021

Since the invasion of Ukraine, there has been another huge increase in prices on the wholesale markets for electricity, gas and coal, and prices have been extremely volatile and dependent on developments in the Ukraine crisis. The Bundesnetzagentur publishes daily status reports on the supply of gas in Germany on this page.

The average wholesale electricity price in Germany over the past three months was €186.98 MW/h, which was three times as much as in the second quarter of 2022 (€60.27 MW/h). The main reason for the higher prices is the increase in natural gas prices that occurred in the second half of 2021. Natural gas power plants set the price for many hours in European wholesale electricity trading. In addition, negative prices occurred with much greater frequency in the second quarter of 2021 and this reduced the average price accordingly.

The highest price (€500.00/MWh) was recorded on Monday 20 June between 8am and 9am. The average wholesale electricity price of neighbouring countries in this hour was €410.54.
In Germany conventional generation (35.9 GWh) covered a large portion of electricity consumption (61.5 GWh) during this period. About 27.7 GWh were generated by coal and natural gas power plants, which contributed to the high prices in this hour.

The lowest price of negative €13.85/MWh was recorded on Saturday 28 May. Between 1pm and 2pm feed-in from renewables (52.1 GWh) exceeded electricity consumption (50.4 GWh). In that hour the average price of the neighbouring countries was €41.91/MWh.

Overall, Germany exported 3,644.1 GWh more electricity than it imported in the second quarter of 2022, making it a net exporter.

Net exports to France, which were more than five times higher than in the second quarter of 2021, were in particular due to unavailability of power stations in France. As was already the case in the first quarter of this year, several nuclear plants were not available because they were undergoing maintenance and modernisation work. France's total electricity generation was down more than 17% compared with the second quarter of 2021 (source: ENTSO-E).
With an average price of €225.99/MWh in France, it was cheaper for France to import electricity from other countries.