12 March 2018 – In the past two months, Germany again exported more electricity than it imported. Net exports were broadly unchanged compared to the same period in the previous year. The largest importers of electricity produced in Germany were Austria, France and the Netherlands. The wholesale price of electricity in Germany averaged €34.52/MWh, which is significantly lower than the average price in the same period of the previous year.

Electricity trade in January and February

Analysis of the SMARD data available shows that Germany's commercial net exports in January and February 2018 amounted to 11.8 TWh. This is equivalent to 12.6% of the electricity generated in Germany during that period. In comparison with the previous year, net exports fell by 0.3%. The main customer for Germany's net exports (exports less imports) was Austria, which accounted for 4,916 GWh (down 40.8% compared to the previous year). France followed in second place with 3,422 GWh (up 38.8%), ahead of the Netherlands with 1,921 GWh (up 112.8%). The figures illustrate the lively activity in the cross-border electricity market. Widely fluctuating price differences between the individual bidding zones constitute the main factor determining the direction of the flow of electricity.

In January and February 2018, 12.6% of the electricity produced in Germany was exported.

The chart gives an overview of Germany's commercial electricity trade with Austria, France and the Netherlands. The black line shows (gross) exports above the zero line and (gross) imports below the zero line. The chart also shows the average wholesale day-ahead prices in January and February.

Wholesale prices for electricity were significantly lower compared to a year earlier. In January and February, the hourly products on the EPEX SPOT day-ahead market were traded at between 79.06 euros and minus 76.01 euros per megawatt hour (€/MWh), resulting in an average price of €34.52/MWh, which is €11.84/MWh less than in the previous year. Storm Burglind and Storm Friederike (see "Electricity generation in December 2017 and January 2018") in particular had a dampening effect on prices: the windy days in January and February led to an increase in electricity supply. This in turn resulted in one-hour periods with low or even negative prices.

On the day-ahead market exchange, the highest price of the past two months of €79.06/MWh was recorded on Tuesday, 27 February, between 7am and 8am. Typical for that time in the morning: the country wakes up and there is a significant increase in electricity consumption. The sun was only just rising in Germany and there was relatively little wind. This meant low output from renewables. Supply was relatively low, while demand was high. This leads to high prices. The price in France and the Netherlands in that one-hour period was even higher, with the result that Germany exported a total of around 8 TWh to these two countries. With the increase in photovoltaic output from 9am onwards, the price fell again significantly to €42.01/MWh at midday.

At the time of the lowest electricity price of minus €76.01/MWh, which occurred on Monday, 1 January between 7am and 8am, there were strong winds and more electricity was being produced in Germany than consumed. Foreign traders bought the favourably priced electricity and Germany's net exports rose to 14.3 GWh. On New Year's Day, the high output resulting from Storm Burglind coincided with the low demand of a public holiday. With the increase in consumption over the morning, the price rose again during the course of the day and reached a maximum of €23.52/MWh. 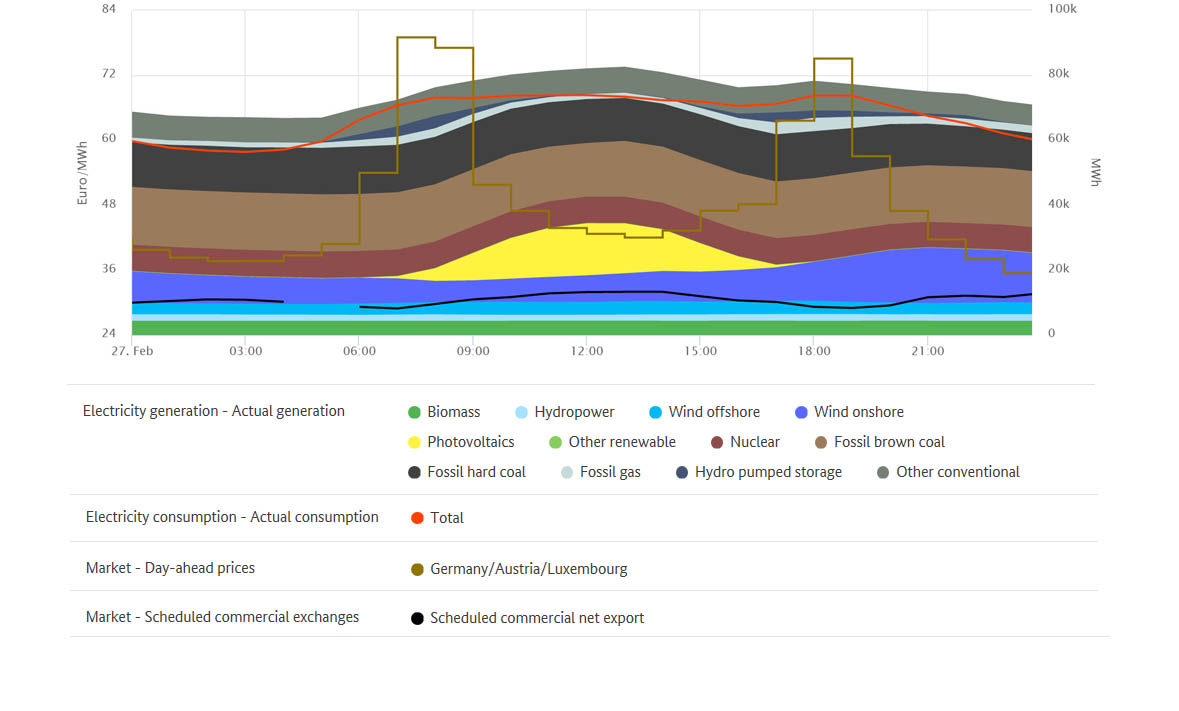 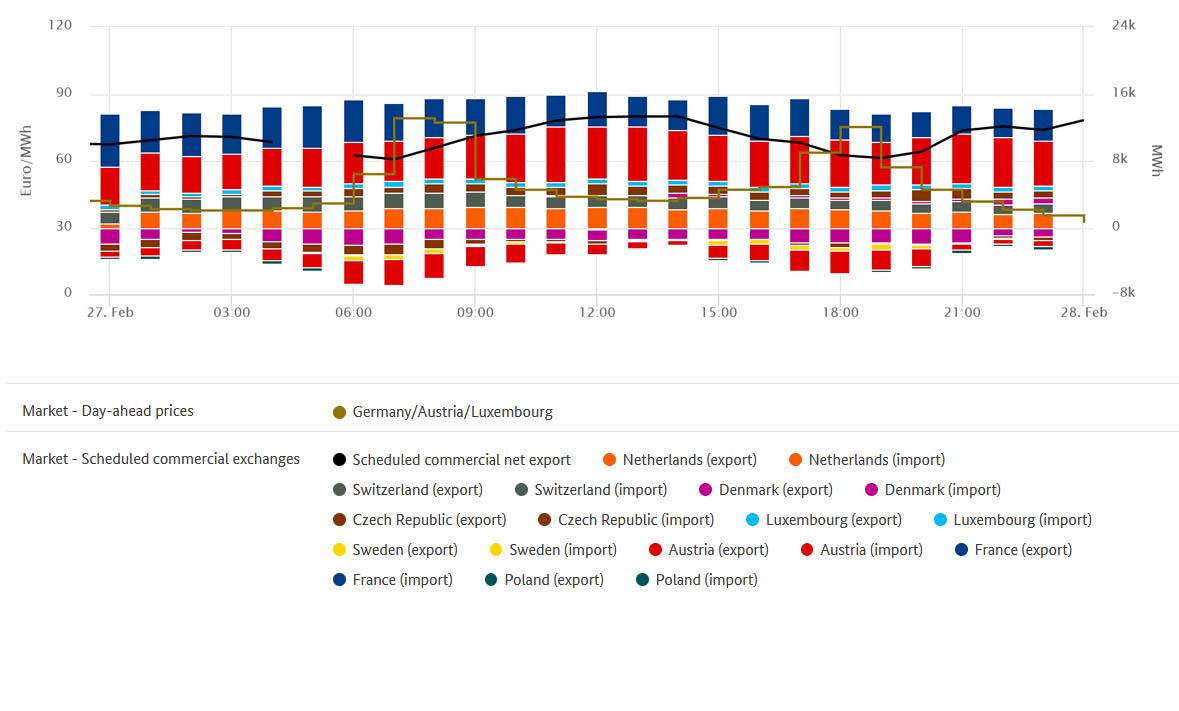 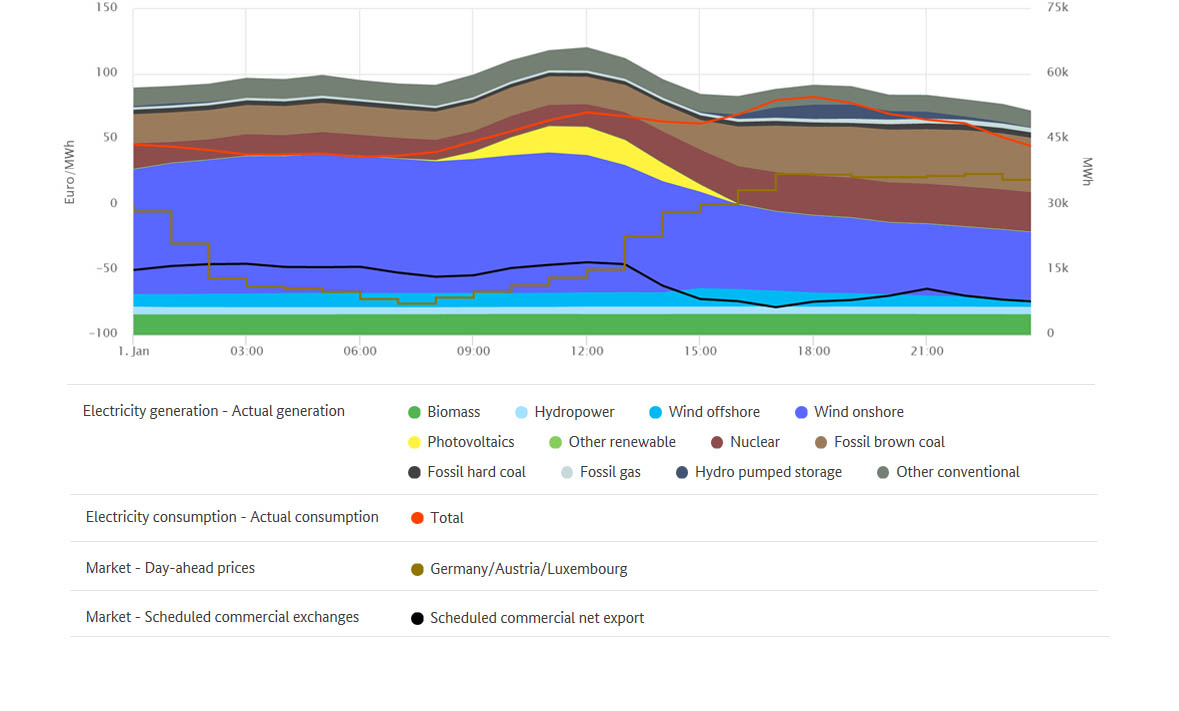 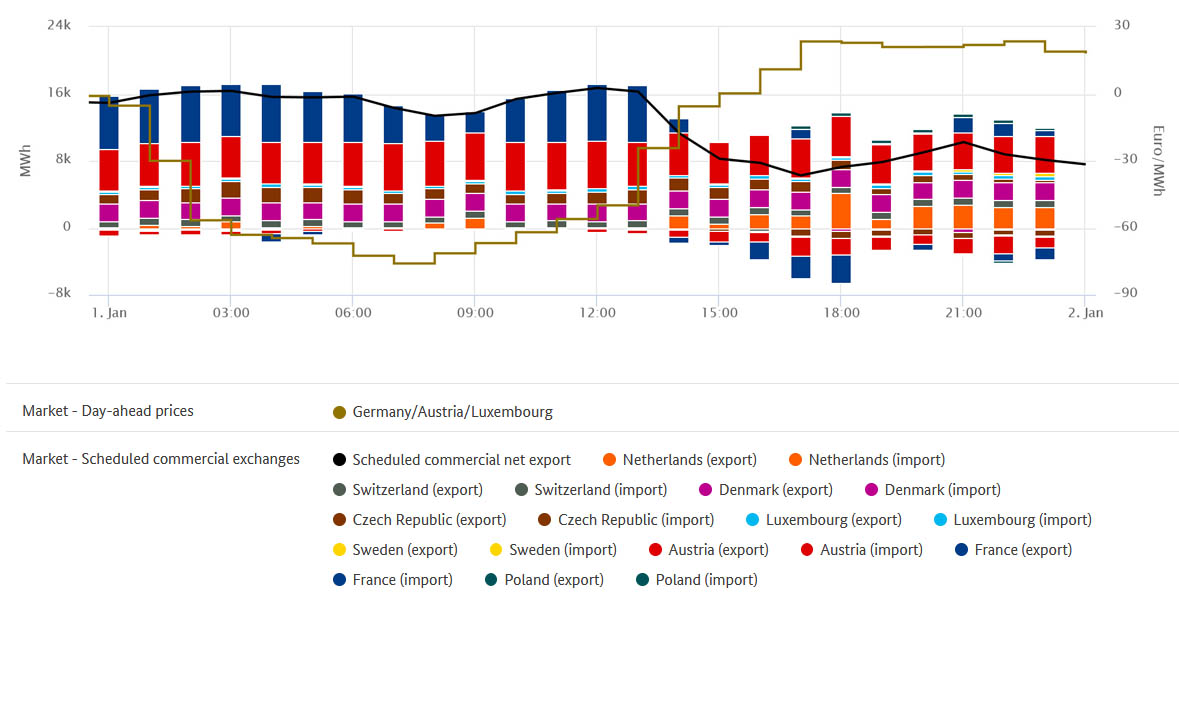