19 September 2019 - Germany exported rather more electricity than it imported in the past two months overall. There were differences between the months, however. In July, net exports were about 274 GWh, but in August the country imported about 257 GWh more electricity than it exported. The largest importers of electricity produced in Germany were Austria, Luxembourg and Czechia. The average wholesale price of electricity was €38.27/MWh, which was significantly lower than the average price in the same period of the previous year.

Solar panels in front of a forest in autumn

In July and August 2019, Germany's commercial net exports amounted to 17 GWh (a 274-GWh export surplus in July and a 257-GWh import surplus in August), corresponding to 0.02% of the electricity produced in Germany during the period. There was a marked drop in net exports year-on-year (July and August 2018: 8,074 GWh). The main customer for Germany's net exports of electricity (exports less imports) was Austria, which accounted for 2,939 GWh (down 37.63% compared with the previous year). Luxembourg followed in second place with 692.2 GWh (up 0.08%), ahead of Czechia with 631.6 GWh (net). The latter had imported 519.8 GWh (net) in the same period last year.

Germany was a net importer from France, Sweden, Switzerland and the Netherlands, from which it took a total of 4,954 GWh net. Last year, it was the other way around, with Germany exporting 3,051 GWh to those four countries.

Changes in imports and exports are the result of frequent short-term price fluctuations, which reflect the interaction of supply and demand in the respective countries and across borders. These fluctuations are part of normal market activity in the European wholesale electricity trade. The change in the balance of trade may therefore be linked to non-availability of power stations, varying weather conditions (influencing the amount of energy from renewable sources), higher prices for CO2 certificates (making electricity generated from fossil fuels more expensive) and varying demand for electricity. For example, in August 2019 consumption was lower than in the same month of the previous year but generation dropped more strongly, so electricity had to be imported.

Czechia may be used as an example to illustrate the influence of wholesale market price differences on imports and exports with Germany. In July and August, the average electricity price fell in both countries but more strongly in Germany. While a megawatt hour of electricity cost about €40.91 on average in Czechia, in Germany it averaged only about €38.27. That meant that electricity traders from Czechia found it worthwhile to import comparatively cheap electricity from Germany most of the time (928 hours). The number of hours in which the price of electricity in Czechia was below that of Germany, thus making it sensible to import electricity from Czechia, was noticeably less than in the previous year (559 hours in comparison to 673).

Wholesale prices dropped sharply in France, too. In the two-month period of last year, they were on average higher than in Germany (France: €54.90/MWh; Germany: €52.87/MWh), while this year it was the other way around (France: €35.53/MWh; Germany: €38.37/MWh). There was a drastic rise in the number of hours in which the price in France was lower than that of Germany (from 45 in 2018 to 625). Wholesale prices in France were on average low partly because of the high availability of nuclear energy. By contrast, in August 2018 several nuclear reactors were not running at full capacity because of a sustained heatwave and two nuclear plants were shut down completely.

The regular price adjustments between Germany and its neighbours become even clearer if the months of July and August are viewed separately. The price gap between Germany and France was still quite small in July (France: €37.66 MWh; Germany €39.39 MWh) but widened in August (France: €33.39 MWh; Germany €36.85 MWh). Net imports from France went up from 763 GWh in July to 1,423 GWh in August.

Compared with the previous year, wholesale prices for electricity fell significantly. In July and August, the hourly products on the EPEX Spot day-ahead market were traded at between 80.01 and minus 49.62 euros per megawatt hour (€/MWh), resulting in an average of €38.27/MWh. That was €14.60/MWh less than in the same period of last year.

The lowest electricity price was minus 49.62 euros/MWh between 2pm and 3pm on Saturday, 10 August. Electricity from renewables made up about 79.8% of total generation during this period. Negative prices mean that generators have to pay for the uptake of the electricity they make during that period. They create a powerful incentive for generators and consumers to react flexibly to electricity production from renewable sources. Exports occurred between 2pm and 3pm since prices were higher than in Germany in all neighbouring countries. Net exports to these countries amounted to 10.6 GWh.

On the day-ahead market exchange, the highest price of the past two months of €80.01/MWh was recorded on Wednesday, 28 August, between 7pm and 8pm. At that time, consumption was high and there was a low level of generation from renewables. The electricity market reacts to this kind of situation by taking power from storage facilities (eg pumped storage stations), reducing the consumption of flexible loads and increasing use of conventional power stations with higher marginal costs, in particular gas-fired power plants. Thanks to the coupling of the electricity markets in Europe, Germany was also able to import cheaper electricity from France, Sweden, Czechia, the Netherlands and Switzerland during the period (approx 4.9 GWh).

One reason for the fall in average wholesale prices is the increased amount of reasonably priced electricity from renewable energy sources fed into the grid, for example in July. No hourly products were traded at negative prices on the day-ahead market in July and August last year. The inclusion of negative prices in the two-month period this year brings the average wholesale price down further. 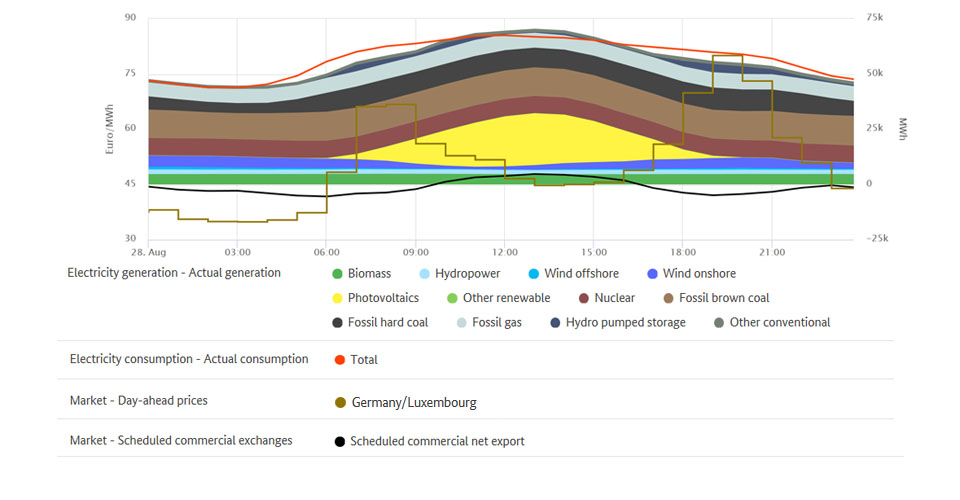 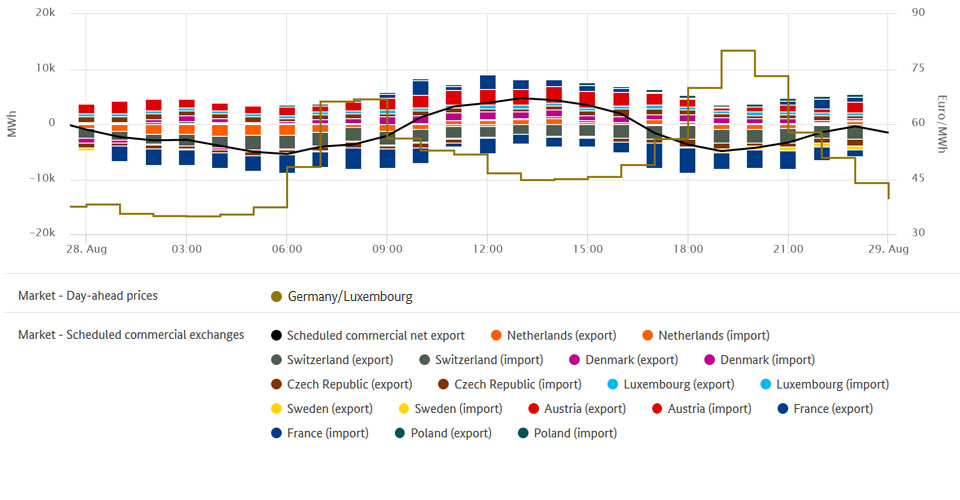 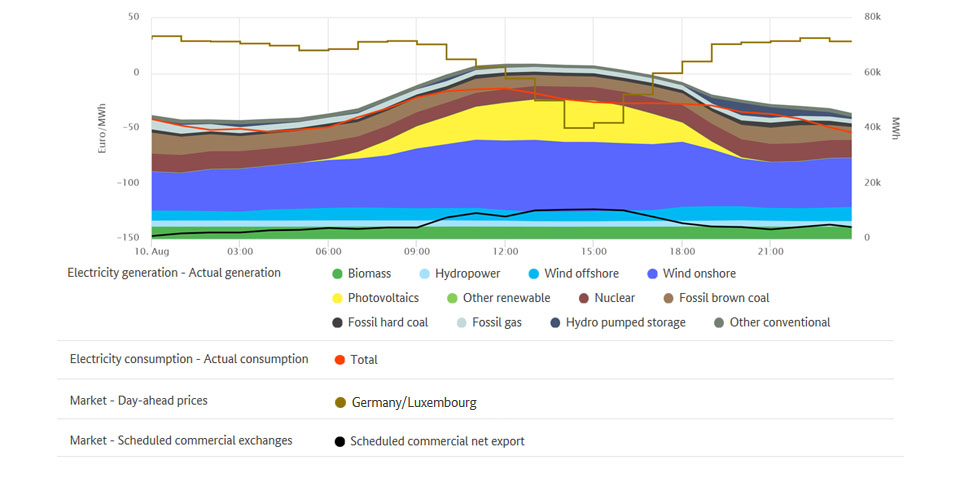 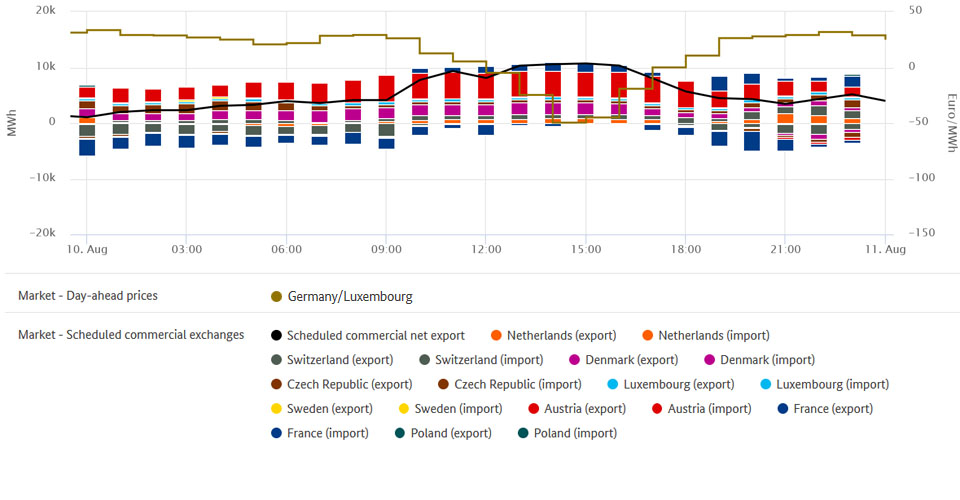