The chart illustrates electricity generation and consumption in Germany in the month of August.

Electricity generation from renewable energy sources reached its highest level of 67.3 GWh on Wednesday 26 August between 1pm and 2pm. At the same time total electricity generation reached its highest level of the month (82.5 GWh). During this time Storm “Kirsten” led to high wind infeed from the on and offshore wind farms at 43.4 GWh. Renewables thereby accounted for around 65% of total generation. A further 17.8 GWh (26%) were generated by photovoltaic installations, the remaining 6.1 GWh (9%) came from biomass, hydropower and other renewables. At the same time, electricity consumption was 67.4 GWh. With these figures, renewables covered nearly all electricity consumption, ie the grid load, during this hour. Generation from renewables on this day was 1.2 TWh and accounted overall for around 75% of total generation (1.6 TWh).

Generation from renewable sources fell to its lowest level of 8.3 GWh on Wednesday 19 August between 2am and 3am, when electricity consumption was also low at 42.1 GWh. At 4.4 GWh, biomass accounted for the majority (53%) among the renewables; hydropower generated 2 GWh (24%); on and offshore wind farms together generated 1.8 GWh (22%); other renewables generated the remaining 0.1 GWh (1%).

Wholesale prices for electricity fell from the previous year. In August, the hourly products on the EPEX Spot day-ahead market were traded at between minus 16.18 euros and plus 90.00 euros per megawatt hour (€/MWh), resulting in an average price of €34.86/MWh. This was on average €1.98 lower than in the same month of the previous year (August 2019: €36.85/MWh), although it was the highest price since January.

The chart illustrates actual electricity consumption and wholesale prices for electricity in August 2020.

The lowest exchange price was recorded between 1pm and 2pm on Sunday 23 August and was minus 16.18 euros per megawatt hour. During this time, the total electricity consumption of 48.1 GWh was met completely by the higher level of renewable generation of 51.2 GWh.

Negative electricity prices were recorded in 4 of the 751 hours of trading. In August 2019, this was the case in 11 hours.
On the day-ahead market, the highest price of the past month of €90.00/MWh was recorded on Thursday 27 August between 8pm and 9pm. In this hour, electricity consumption was high at 55.7 GWh and there was a low level of generation from renewables (8.9 GWh). The electricity market reacts to this kind of situation by taking power from storage facilities (such as pumped storage stations), reducing the consumption of flexible loads and increasing the use of conventional power stations.

Germany exported a total of 794.6 GWh more electricity than it imported in August, making it an overall net exporter for the first time since March. In August 2019 it had been a net importer, importing 256.8 GWh.

Changes in imports and exports are the result of frequent price fluctuations and part of normal market activity. They reflect the interaction of supply and demand throughout the whole of Europe. At what point in time electricity is imported or exported does not depend solely on supply and demand, but also on the electricity prices of the other countries. Wholesale prices determined as a part of market coupling result from what are known as the relative generation costs, which vary over time. Among other things, wholesale prices reflect the costs for fuels or C02 certificates, which in turn depend on other factors. Available transmission capacity at the national borders also plays a role. Particularly This is especially true when small price differences on the electricity market lead to big changes such as the switch from a net import to a net export, the details then play a significant role.

Germany was a net importer this month only from the Netherlands (520 GWh) and Switzerland (320 GWh).
A total of 1.6 TWh was exported, which corresponds to 4.1% of the electricity that was produced in this period in Germany. Although Germany exported 1.1 TWh less electricity than in the same month of the previous year, at that time Germany also imported around 3 TWh, more than three times the amount imported this August (0.84 TWh), which made Germany a net importer in August 2019.

One reason for the large decrease in exports to Austria was the overall decrease in exports from Germany.
Another reason was that Austria’s electricity generation was 8.4% higher than in the same month of the previous year, with electricity consumption down at the same time by 6.1%.
Renewables’ share of energy consumption (the grid load) increased in Austria from 70.4% in the same month of the previous year to 85.9%.
Just last August Austria imported a total of 2.2 TWh of electricity from other countries, and this August that figure was only about 1.8 TWh. 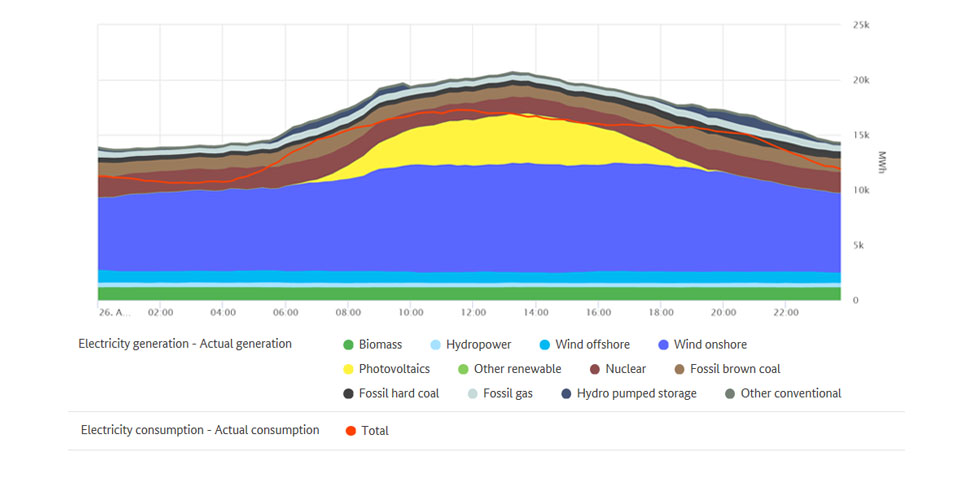 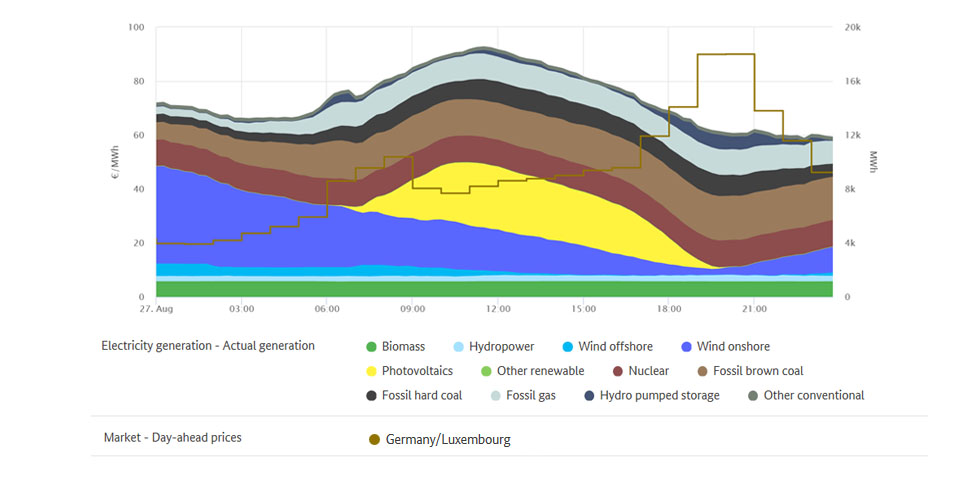 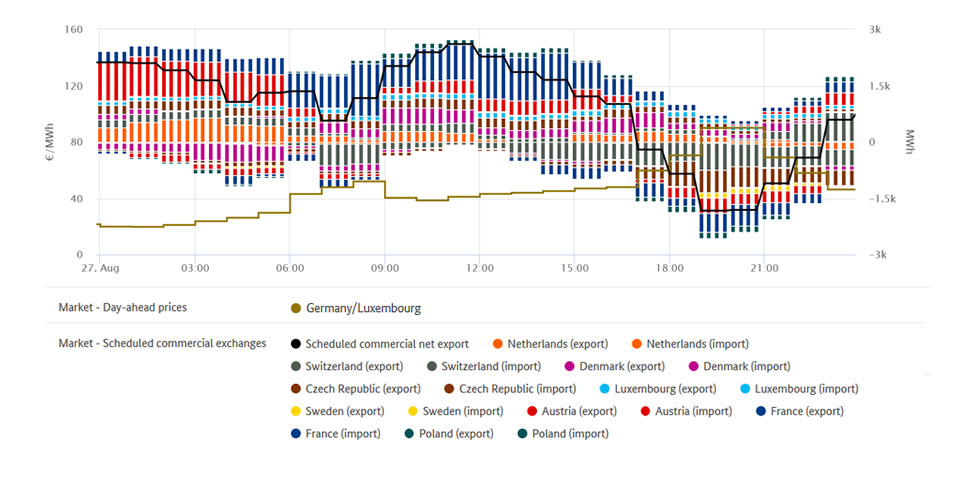 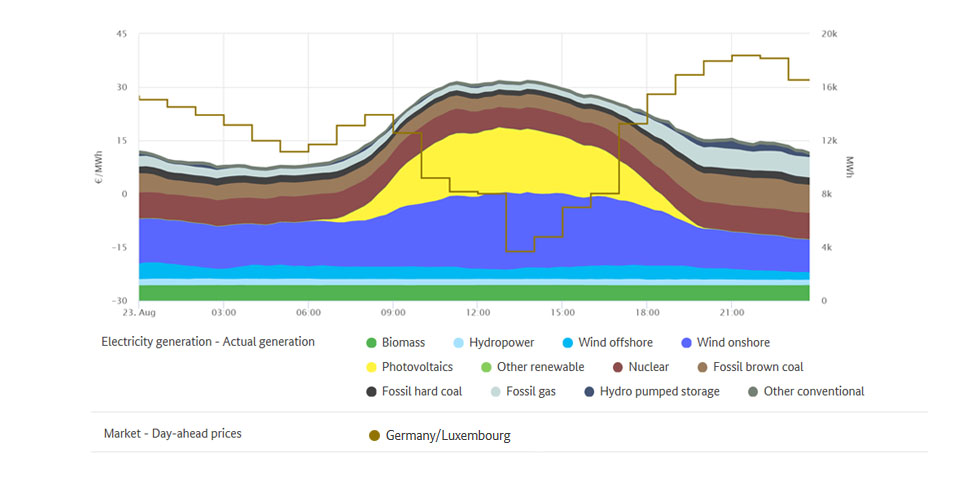 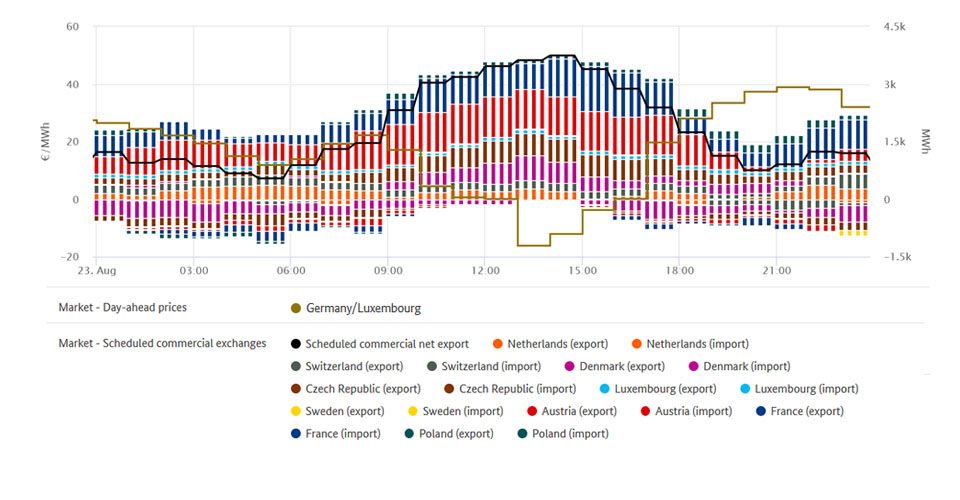