13 August 2020 – Electricity generation and electricity consumption in Germany were down 6% and 8% respectively compared with the same month of the previous year. The average wholesale price was €30.06/MWh, which was lower than the average price in the same month of the previous year, although it was at its highest since January. Germany imported 322.4 GWh more electricity than it exported during July, making it an overall net importer.

The chart illustrates electricity generation and consumption in Germany in the month of July.

The decrease in electricity generation from conventional sources is mainly due to the greatly reduced use of black coal (-52%), lignite (-22%) and nuclear power (-22%). By contrast, there was a 22% rise in generation from natural gas.

One possible reason for the overall lower electricity generation could be the decrease in electricity consumption during the coronavirus pandemic. There are also other factors in individual plant dispatch planning in the European electricity market, for example fuel costs or CO2 certificate prices, which impact the relative costs of a country’s fossil electricity generation. Changes in the installed and available capacity may not be disregarded either.

Electricity generation from renewable energy sources reached its highest level of 60.5 GWh on Tuesday 6 July between 1pm and 2pm. Photovoltaic systems generated 22.8 GWh (38%), onshore wind farms 26.7 GWh (44%) and offshore wind farms 4.2 GWh (7%). The remaining 6.8 GWh (11%) came from biomass, hydropower and other renewables. During this time, electricity consumption was 64.7 GWh. Renewables therefore covered nearly 93.5% of electricity consumption, ie the grid load, during this hour.
On Saturday 4 July from 9.45am to 5.15pm and on Sunday 5 July from 7.15am to 5pm, generation from renewables covered all of the electricity consumed.

Generation from renewable sources fell to its lowest level of 7.5 GWh on Saturday 18 July between 9pm and 10pm, when electricity consumption was also low at 42.9 GWh. At 4.5 GWh, biomass accounted for the majority (60%) among the renewables; hydropower generated 2.1 GWh (28%); on and offshore wind farms together generated only 0.7 GWh (9%) and other renewables generated the remaining 0.2 GWh (3%).

The chart shows electricity consumption and renewable electricity generation on 4 and 5 July 2020. On those days renewables were able to fully meet demand (grid load) for many hours.

Wholesale prices for electricity fell from the previous year. In July, the hourly products on the EPEX Spot day-ahead market were traded at between minus 64.99 and plus 60.02 euros per megawatt hour (€/MWh), resulting in an average price of €30.06/MWh. This was on average €9.62 lower than in the same month of the previous year (July 2019: €39.69/MWh), although it was the highest price since January.

The lowest exchange price was recorded between 2pm and 3pm on Sunday, 5 July and was minus 64.99 euros per megawatt hour. During this time, the total electricity consumption of 46.7 GWh was met completely by the higher level of renewable generation of 49.4 GWh.

Negative electricity prices were recorded in 24 of the 744 hours of trading, although there had not been any in the same month last year.
The "six-hour rule", according to which larger new installations receiving payments under the Renewable Energy Sources Act (EEG) and selling electricity do not receive payment in such periods, only came into play on Sunday 5 July. On that day there were 16 consecutive hours of negative prices. Under the rule, only if the day-ahead price on the electricity exchange is negative for a period of at least six consecutive hours do the installation operators not receive the market premium as from the first hour in the period with negative prices.

On the day-ahead market, the highest price of the past month of €60.02/MWh was recorded on Thursday 30 July between 7pm and 8pm. In this hour, electricity consumption was high at 53.8 GWh and there was a low level of generation from renewables (13.4 GWh). The electricity market reacts to this kind of situation by taking power from storage facilities (such as pumped storage stations), reducing the consumption of flexible loads and increasing the use of conventional power stations.

Changes in imports and exports are the result of frequent price fluctuations, which reflect the interaction of supply and demand in the respective countries and across borders. These fluctuations are part of normal market activity in European wholesale electricity trading.

A total of 2.1 TWh was exported, which corresponds to 5.5% of the electricity that was produced in this period in Germany and nearly twice the amount exported in June (1.2 TWh). The main customer for Germany's net exports of electricity (exports less imports) in July was Austria, which accounted for 848 GWh (down 46.5% compared with the previous year). Czechia followed in second place with 463 GWh (up 6.8%), ahead of Poland with 340 GWh net (up 31.5%).

One reason for the large increase in exports to Poland was the number of hours in which electricity from Germany was cheaper (725 of the 744 hours of trading). Fossil fuels dominate electricity generation in Poland. Black coal alone makes up 51% of the installed generating capacity, lignite another 17%. That makes the electricity traded in Poland relatively expensive, partly due to the increased prices for CO2 certificates.

Trade with Austria is a different story; there, renewable energy, particularly hydropower, makes up the majority of installed capacity. Although Austrian electricity consumption fell in July (-360 GWh or -7.2% year-on-year), generation there increased by 407 GWh or 8.5%. Consequently, Austria imported less electricity from its neighbours than it had done in the previous year. 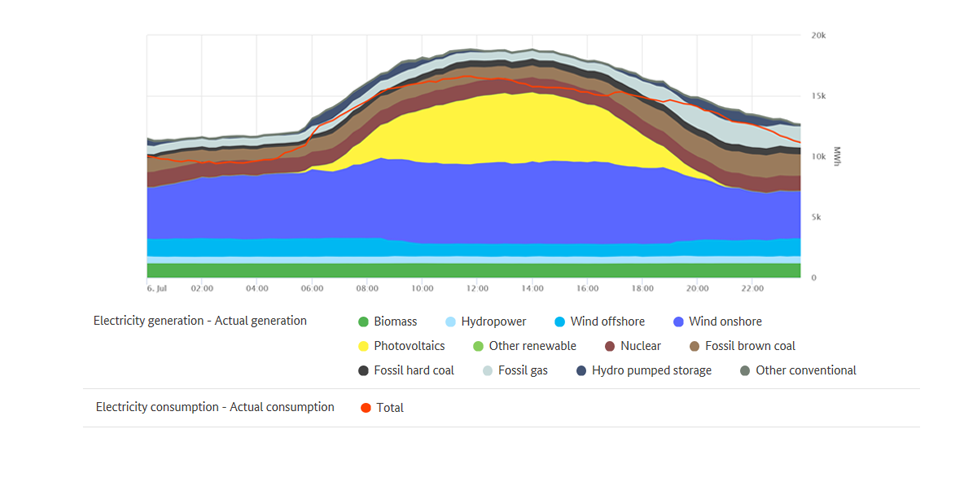 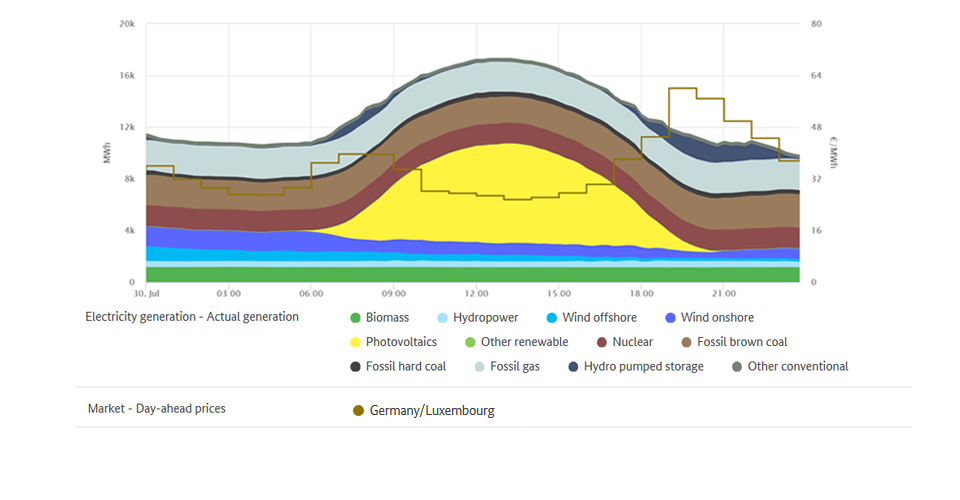 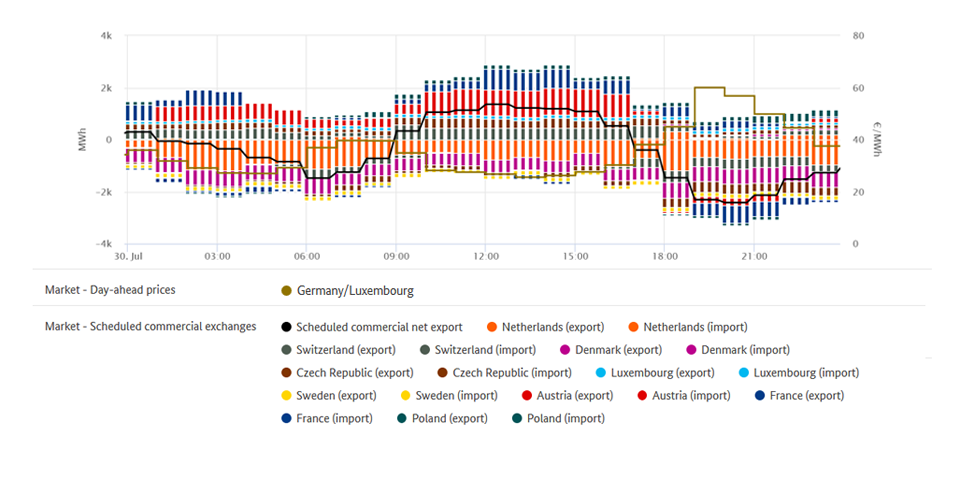 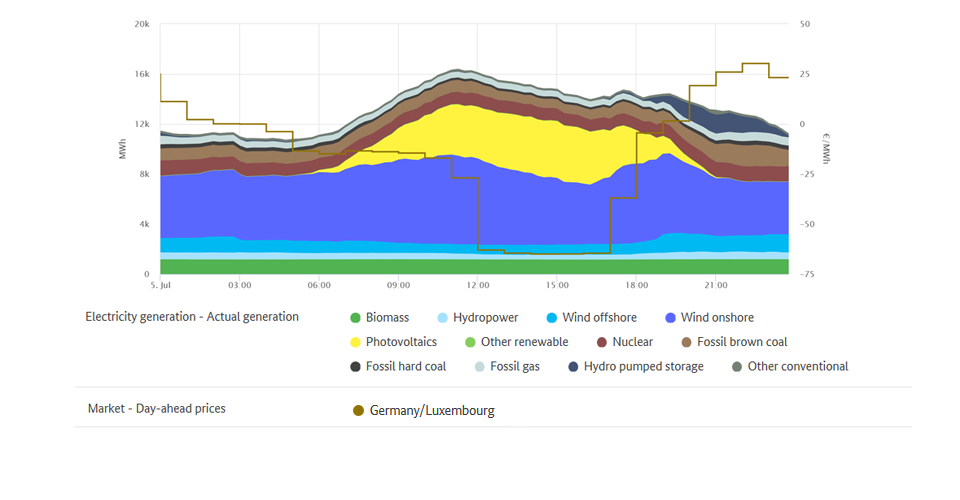 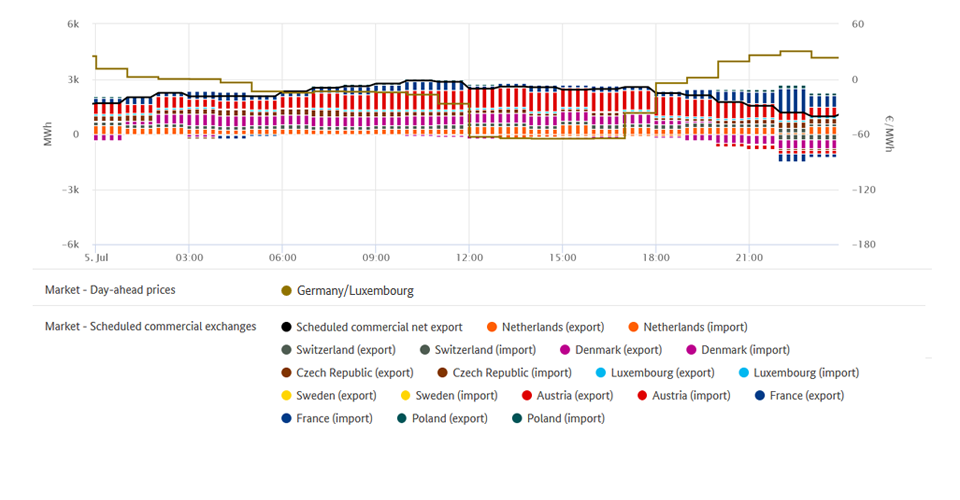